Toby is the fifth episode of the third season and the 41st overall episode of This Is Us.

Kate and Toby try to keep busy while waiting for big news; Randall embarks on a new journey; Kevin meets someone from his father's past.

As a child, Toby lays in bed while he listens to his parents fight. His mom comes into the room and tells him that everything is going to be alright. In the present, Kate gets a call from Dr. Jasper telling her that they have three chances to get pregnant with the eggs that they harvested; they later get another call telling them that only one of the eggs is viable. In the past, Randall and Kevin are getting ready to go to the prom. Kate tells them to have fun and Rebecca gives Randall a look. Randall tells her that he already asked and that she doesn't want to go with them. In the present, Beth is getting ready to go to a job interview. Randall is excited because it's his first day of his campaign for city council. Randall reminds her that if at any time she doesn't feel comfortable about him running to tell him and he'll drop out.

Kevin and Zoe are driving to Baltimore to meet a guy that served with Jack in Vietnam. In the past, Toby goes shopping with his Mom. Kate and Toby are waiting until four o'clock because that's when the doctor is going to call with the pregnancy results. Toby says that they are going to go to work to keep themselves distracted. He says that they'll meet back at four to get the results together. In the past, Miguel shows up with a piano for Rebecca's new home. Kevin and Zoe are at a gas station getting snacks when Zoe notices that the cashier has a prejudice against her. Randall hosts a meet and greet at a BBQ joint for his campaign.

In the past, Toby's Dad decides to move out. Toby goes to the pharmacy to get his meds since today is the day he finds out if he can get back on them. The pharmacist tells him that he needs to call his doctor and get back on his meds properly. Kate goes to an office to sing for them as an Adele impersonator. In the past, Randall and Kevin arrive at Alison's house for the prom. Alison's dad doesn't give Randall a warm welcome and Alison's mom apologizes. Randall tries to give a speech about how he wants to help the neighborhood, but the community isn't having it and people start to leave. Kevin arrives at the home of the Vietnam vet.

Toby goes to an arcade. He remembers how his last relationship ended because he didn't take his meds. Kate gets asked why she isn't doing something else since she's so talented. Kate tells him that it's because she shuts music out of her life when bad things happen to her. In the past, Kate sits at the piano and plays. Rebecca comes and joins her. Kevin talks to Don about Jack and learns that he was a squad leader in the war, and that in October 1971 Jack saved his life. Zoe talks with Don's wife and says that she doesn't know if she wants to explain how to be black to a white movie star. Don's wife says that she needs to decide if it's worth it to her.

Randall is upset because his event didn't go well. Mr. Jones, the owner of the BBQ restaurant, tells him to go back to where he belongs. Randall says that they are blindly giving their loyalty to Sol Brown. Mr. Jones tells him how Sol saved their restaurant. Toby's mom comes over and tries to get Toby out of bed. Toby goes to see a therapist and attends the meeting where he meets Kate. Toby continues to play the video game in the arcade but an angry girl behind him tells him that he's been on it for an hour. Toby learns that it's 3:45 and rushes home. Kevin and Don look at pictures of Jack from Vietnam. Don apologizes for not having all the answers that Kevin's looking for.

In the past, Randall arrives home early from the prom. Miguel asks why and Randall says he never made it there because Alison's dad freaked out. Miguel tries to talk to him, but Randall says that he just wants to go to bed. Kevin and Zoe are in their hotel room when a package arrives for Kevin. It's a pillowcase that he bought for Zoe. Zoe sits him down and explains to him about the clerk and why she needs the pillow case (it's for her hair). Kevin asks why she's just now telling her this and Zoe says it's because she thinks he might be worth it. In the past, Rebecca talks to Kate about music. She tries to get Kate to sing, but Kate says that she can't. Rebecca tells her one day she'll sit back down at this piano and start singing again.

Toby arrives home and apologizes for being late. Kate tells him that the doctor already called and that the treatment worked; she is pregnant. Toby hugs her and starts to cry. Kate tries to console him. Beth tries to cheer up Randall. Randall says that he's going to have to go a different way to get their trust. Randall asks Beth about the interview and Beth says it went well. Beth remembers the interview and how it didn't go like she wanted because she got emotional about her last job. Kate tells Toby that she spoke to the doctor and that he's scheduled to go in tomorrow to adjust his meds. In the past, Kevin has arrived at Miguel's house drunk. Miguel calls Rebecca and tells her that he's there. She tells him she's on her way, but Miguel says that Kevin is asleep and is fine staying there. Rebecca thanks him for being so good to them. As he gets off the phone, Miguel reflects on his long ago promise to Jack to look out for Rebecca and the kids should anything happen to him.

Kevin and Zoe walk downstairs from their hotel room and find Don waiting for them. He tells Kevin that he has to understand that the Jack he knew wanted everything from the war behind him, but who's to say he wouldn't have wanted Kevin to know his story. He gives Kevin a stack of letters Jack wrote and tells him that he hopes they help him. 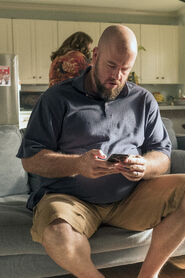 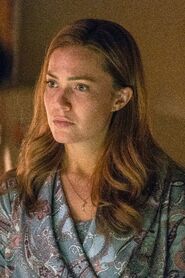 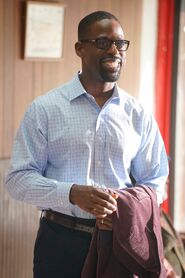