There is the seventh episode of the fifth season and the 79th overall episode of This Is Us.

Kevin embarks on a stressful road trip. In the past, Jack and young Kevin go to a football training camp. 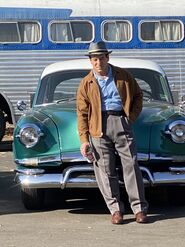 "My dad was the most "there" person that ever lived. Everything that I do, I do with his voice in my head." ― Kevin