The Club is the sixth episode of the fourth season and the 60th overall episode of This Is Us.

Kate and Toby try to make time for their marriage. Jack attempts to prove himself to Rebecca's father. Randall struggles to find his place with the other councilmen.

Young Randall idolizes his black teacher, Mr. Lawrence. After Randall expresses interest in Tiger Woods, Jack takes Randall golfing and relates his experience. Randall notes he would not have been allowed at Dave's club. Jack impresses upon Randall the social importance of golf, and Randall plays regularly. Jack invites Mr. Lawrence and his wife to dinner, and asks Mr. Lawrence to appraise him of Randall's concerns.

In the present, Randall invites Wilkins and two other council members to golf at an exclusive club. Feigning ineptitude, Randall puts Wilkins at ease and builds rapport with the others, gaining consideration for his ideas.

Toby experiences impotence. Kate asks if he still finds her attractive; he does, but has anxiety over her reservations towards his weight loss. She expresses wholehearted support, reigniting their passion.

Kevin and Cassidy work out together. Kevin has an enjoyable date with a gym employee, but cuts it short to comfort Cassidy, who has fought with Ryan. She kisses him; he reciprocates and they have sex. 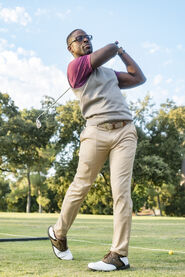