Six Thanksgivings is the eighth episode of the third season and the 44th overall episode of This Is Us.

The Pearsons have an unconventional Thanksgiving dinner; in the past, Jack, Rebecca, and the Big Three spend Thanksgiving with Miguel.

It's Thanksgiving, and Rebecca cries as she cuts the onions. Jack gives her a kiss on the cheek as he enters the kitchen. Rebecca points out that this will probably be the last Thanksgiving they have with the kids still living at home. She wonders if they should've invited their extended family and Jack replies no, because both of their families are horrible, and also reminds her that Miguel is coming over for Thanksgiving dinner. They hear laughter coming from the family room and go to investigate. Randall, Kate, and Kevin are sitting around laughing about Randall's college essay question. The doorbell rings and Jack answers it. Miguel walks in talking on the phone with his ex, Shelley; they're clearly having a heated argument. Later, the Pearsons and Miguel sit around the table getting ready to eat Thanksgiving dinner. Miguel excuses himself for a moment and Jack follows him. Miguel apologizes, but is worried about his kids - he knows that he wasn't there for Andy and Amber like he should've been. Jack tells him that while it's true that he could've been a more present father, he was always a great provider. Jack says that Miguel needs to show his kids that he is still their father.

In the present, Beth asks Randall if he's heard from Jae-won; she's worried that he doesn't like that she's part of Randall's campaign. Randall reassures her that she's had a million great ideas since she joined his campaign. Beth tells Randall to hurry up and finish getting ready because Toby and Kate will be arriving any minute. Beth asks if he's sure that they can handle cooking Thanksgiving dinner while they're away, and Randall says that they are excited to be in charge this year. After Kate and Toby arrive, Beth lets them know that Tess is going to stay behind because she isn't feeling well. Both Randall and Beth are worried that all this is too much for a barely-recovering Toby, but Toby reassures them that everything is going to be fine, so they leave with their other two daughters to head to the homeless shelter. The Pearsons arrive at the shelter and are greeted by an angry Jae-won. He's upset because he felt like the previous location got more news coverage. Beth is saved from the conversation by Annie, who says that she needs to go to the bathroom.

Jae-won asks Randall if Beth has ever worked on a campaign before. Randall responds that he appreciates him joining and helping him run his campaign, but Beth is his wife and that the issue is not open for discussion. The Pearsons serve Thanksgiving dinner to the less fortunate. While serving, Deja remembers a time when she was on the other side of the line. As they are leaving, Jae-won tells Randall that he called in a favor and got a reporter to come take pictures. Beth doesn't think this is a good idea and Jae-won pulls Randall aside to argue the point. Randall tells him that Beth is his wife and he has to agree with her. This upsets both Beth and Jae-won. After, Beth asks Randall how many of the ideas she's had have been good ones or if he just being nice to her because she recently got fired. Randall doesn't say anything, upsetting Beth even further. Suddenly, her phone starts to beep. She checks it and tells them that they have to get home.

In the past, Jack is in Vietnam supervising his brother fixing the fence. A chopper flies overhead and Jack informs Nick that they're having a turkey delivered and that he's welcome to join them...if he leaves his bad attitude at the door. Later, Jack is writing letters to Robinson at dinner. He notices a Vietnamese woman having trouble carrying two buckets and goes over to help. One of her relatives rushes over instead and yanks the buckets from Jack and ushers the woman along. After dinner, Jack goes to give leftovers to the woman and asks to see her injured son. Having seen the wound, Jack runs to get Nick and asks him to clean and dress the kid's wound. Nick refuses because he doesn't want to save a kid who'll grow up and kill an American. Jack takes care of the kid instead and Nick leaves. Jack goes to see Nick after and tells him that he needs to wake up because there are only woman and children in the village. Nick tells him that he can be nice to them all he wants but they aren't just woman and children.

William is performing at a Narcotics Anonymous meeting when he first meets Jessie. Later, William invites Jesse over for dinner. Jesse tells William the true story of why he came to the States. William invites Jesse to one of his performances later that night. However, when Jesse arrives, he walks in with a woman. In the present, Toby is freaking out over making Thanksgiving dinner. Kate reassures him that they're going to be great. Toby goes upstairs to give Tess some soup but catches her holding a box of pads. He tells Kate about it and Kate goes upstairs to check on her. At first, Tess just wants Kate to leave her alone, but opens the door after a while. Kate takes her back to her room and tells her about her own embarrassing first period. Kate tells her that if she ever wants to talk that she's here for her, because soon she'll have her first kiss and her first boyfriend. Tess corrects her and says girlfriend, which is a shock to Kate.

Miguel and Rebecca are on their way to Amber's house for Thanksgiving. Miguel feels like a pity invite and he apologizes for Rebecca missing out on her family's Thanksgiving. Rebecca reassures him that they'll make it back in time to have dessert at Randall's. At Amber's, things don't go quite as planned. Miguel ends up chastising his children after Andy makes a comment about Rebecca stealing Miguel from his mom. Miguel has had enough and tells them that they can treat him any way they want, but that they must respect Rebecca. Amber reaches over and grabs her father's hand and Rebecca changes the subject by asking what the football game score is. Tess asks Kate not to tell Beth or Randall about wanting a girlfriend. Kate says that she should tell them because they are going to love her no matter what. Kate walks into the kitchen where Toby has gathered an array of take-out since he ruined Thanksgiving dinner.

In the past, Randall reads his answer to his college essay question to his family. Kevin attends Thanksgiving dinner via FaceTime. Jesse walks up to William and tells him that the woman he came with is his cousin. William replies that he's cool. The woman gives Jack a necklace as payment for helping heal her son. Deja sends a text to her mom and wishes her a happy Thanksgiving. Rebecca and Miguel show up at Randall's for dessert and Annie greets Miguel and calls him grandpa. Randall finally answers the question and reveals that the most impactful person on his life was the firefighter that found him. 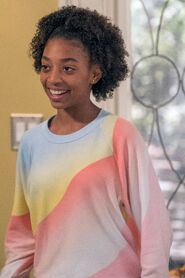 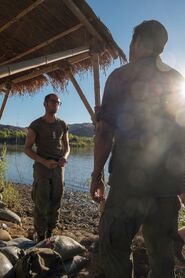