Caitlin Thompson
"I have stumbled through life gratefully accepting whatever scraps of affection anyone would give me."

Madison Simons is the ex-fiancé of Kevin Pearson and the mother of Nick and Franny, she is also the best friend of Kate Pearson. Madison has struggled with her eating disorders and body image since she was in high school. She is not close with her family.

Madison's father was a businessman and traveled a lot. He wasn't around much when she was little, and he was a withholding man.

One day her mother gave ultimatum to her father to take her and Madison with him on his business trip. Her father agreed and took them to Japan. On the trip the family went to a garden and she spent the happiest day of her life there because they were finally a family.

A few weeks later, her parents told her that they are getting divorce.

At age seventeen, she almost died from bulimia, as revealed in Changes.

Madison Simons met Kate and Toby through a support group. At first, Kate was somewhat hostile towards Madison because she didn't think Madison belonged in the group. They later became friends when Kate told Madison she was pregnant. It is shown that Madison is a bulimic.

Madison slept with Kevin and despite agreeing not to tell Kate, she confessed and apologies to Kate soon after. (The Cabin)

Kate and Madison make up at a lunch, Madison gives a good advice to Kate about Toby.

March 2020 Baby Jack’s first birthday. Madison is pregnant with twins, and thanks to her OB/GYN (who tells her not to give up on the father without trying. After the appointment, Madison heads over to Jack's birthday where she is unexpectedly in the middle of Kevin and Randall's argument. Randall storms off, and Madison tells Kevin that she is pregnant with his children. Shocked, Kevin leaves the room, where the brothers are at it again over which they exchange words that neither of them can take back, nor forget. After that Kevin commits to fatherhood. (Strangers: Part Two)

COVID-19 prompts Kevin and Madison to quarantine together; they start a relationship and announce her pregnancy to family members. (Forty: Part One)

August 2020: The Big Three turn 40 For their birthday, Kate, Kevin, and their families drive to the cabin, where Rebecca and Miguel are quarantined. Madison fears for the babies after a fall. Kevin proposes marriage, and reaffirms it after urgent care allays her fears. (Forty: Part One)

Concerned for a missing Rebecca, Kate is unable to reach Kevin and calls Randall, who drives to the cabin, arriving after police escort Rebecca home. Having learned he will have a son and daughter, Kevin asks Randall's advice about raising a girl; Randall reassures him Madison will support him. (Forty: Part Two)

Kevin and Madison struggle to connect until agreeing to be more open with each other; both share their lifelong body- image struggles. (Changes)

Kevin is conflicted between shooting his new movie far away from Madison in Vancouver, and remember Randall's old advice and calls Randall to try repair their relationship. A Long Road Home

Kevin leaves the film set on learning Madison is in labor, quitting when director Foster demands he return. Kevin rescues a crashed motorist, a father who reassures him that the children won't remember if Kevin misses their birth. Kevin wants to emulate Jack's "there"-ness. Having dropped his wallet beside the crash, Kevin begs a TSA agent to help him board his flight. Madison is alone at the hospital, as Kate is at Ellie's labor induction. (There)

Randall coaches Madison through labor until Kevin arrives. The twins are born: Nicholas, after Uncle Nicky, and Frances, after Madison's grandmother. (In the Room)

Kevin is having a lot of thoughts and feelings as he and Madison prepare to bring Nicky and Franny home. And all of these boiling emotions bubble over when he realizes there’s a paparazzo following them. He pulls over and gets out to yell at the guy. Madison defuses Kevin's argument with the paparazzo. She slips into the driver’s seat and tells Kevin that she’d like him to nap the rest of the way home. He dreams Jack tells him not to repeat Jack's mistake of comparing himself to his father. Kevin wakes up alone in the car, goes inside and finds Madison in the house and says that even though they’ve been engaged for a while, he wants to do for real. “I really want you to be my wife. I want to be a family,” he says, slipping his hospital bracelet onto her wrist in lieu of a ring. She says yes, then they kiss. The Ride

Madison welcomes Nicky at their home. (One Small Step ...)

All seems to be in place for Madison and Kevin to get married in the season finale The Adirondacks. However, Madison has intense flashbacks of her childhood, of scenes in which her mother left her with her abusive father; she remembers her father telling her that she should settle for anyone who will give her love. Then come flashbacks of a particularly unpleasant breakup with a man named David, which marks the start of Madison's descent back into an eating disorder (bulimia). The combination of Kevin's non-committal attempts at proving his love to Madison, along with Madison's refusal to be with someone who does not completely love her leads to a difficult but arguably correct decision. Madison, still clad in her wedding dress and makeup, walks to Kevin two hours before they are to be wed and asks him if he loves her. Kevin cannot bring himself to tell Madison he loves her, and Madison tells Kevin that she cannot marry him. However, the two appear to be amicable in the future from the flash-forwards.

Before she met Kevin, the fifth boyfriend in a row broke up with her because he didn't see a future with her.

Madison and Kevin met at Kate's wedding and couple of times at Kate's family events. They only spoke a few with words with each other. But all of this changes when Madison is helping Kate with Audio and Kevin comes to visit Jack but Kate and Jack are on the trip and Toby is at work. Madison and Kevin talk about their not so great love life at Kate's house.

Somehow they end up sleeping together at Madison's house. At first Madison and Kevin agrees to keep their one night stand a secret from Kate. Later, however, Madison couldn't bare her guilt and spills the beans to Kate. Later, Madison finds out that she is pregnant with Kevin's children, at first she doesn't want to tell Kevin. She changes her mind and tells him that she is expecting twins at Jack's birthday party. Kevin is surprised but he tells Madison that he is "all in" and expresses his enthusiasm about becoming a father.

During the pandemic, Kevin moves into Madison's house. At Kevin's birthday Kevin and Madison become engaged after Madison falls and can no longer feel the babies move. An ultrasound reveals both of the twins are fine.

In the episode In the Room, the twins Franny and Nick are born on the same day as their cousin Hailey Damon.

Shortly before the wedding, Madison breaks up with Kevin after Kevin is unable to say directly whether he loves her.

Madison's father was a businessman and traveled a lot. He wasn't around much when she was little, and he was a withholding man.

One day her mother gave ultimatum to her father to take her and Madison with him on his business trip. Her father agreed and took them to Japan. On the trip the family went to a garden and she spent the happiest day of her life there because they were finally a family.

A few weeks later, her parents told her that they are getting divorce. Her mother walked out leaving Madison's father to raise her.

Madison and Kate met in a support group for people with eating disorders and Madison became Kate's best friend. However, at first Kate disliked Madison, because she didn't understand why she was in the support group due to seeing her as being thin and attractive woman. Madison took Kate for wedding dress shopping, when Kate told in group that she was nervous about finding the right wedding dress for her size. At the shop Kate realized that Madison had bulimia. When Kate confronted Madison, she blew her off and left Kate in the parking lot. Later that day Madison called Kate in a state of panic because she fainted.

Kate went to her house and found Madison with bleeding head at the floor in her bathroom. Kate helped her and Madison told some truth about her bulimia. After that they become friends. Madison organized her bachelorette party at Vegas. She came for Kate's wedding at the Cabin. She was in the hospital for Jack's birth. Kate was angry when Madison slept with Kevin. However, later Madison apologized to Kate and they made up.

She volunteers at a local high school. 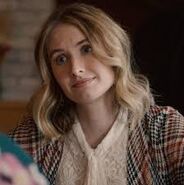