Kamsahamnida is the sixth episode of the third season and the 42nd overall episode of This Is Us.

Rebecca gets a call from Kate, during which Kate tells her that she's pregnant. Kate then proceeds to call Randall and he gets excited over the news. He wants to talk to Toby, but Kate tells him that Toby's been depressed. Randall calls Kevin to tell him about Toby. Kevin asks why he's depressed and Randall tells him it's because he went off his meds. Miguel asks if they can just put him back on his meds and Rebecca tells him that they did, it's just taking a while to kick in. Kevin asks Kate if she wants him to come out there to help, and she says that there really isn't anything he can do. Kate goes into the bedroom and tries to get Toby to go on a walk with her and their dog, but Toby just rolls over and says no.

Young Kevin and Young Randall fight after Randall lost while playing video games. Jack comes home after work with a black eye; he got it at the gym when he was boxing with another man. Rebecca says that boxing is dangerous and makes him promise to use only the punching bag. Jack promises. Beth follows up on a job inquiry while Randall is getting ready to go to church in Philadelphia. He wants to connect with the community. Tess and Annie tell their parents that they're behind on Girl Scout cookie sales. Beth tells them that they can set up a table today and they can make posters. She asks them to invite Deja to go with them.

Kate talks to Rebecca on the phone. She asks Rebecca what she'd do in the situation. Rebecca says that all she can do is be patient and supportive. Zoe is excited because she's finished with her documentary, and Kevin says they should celebrate. Zoe says that she has this tradition where she checks into a hotel and pampers herself. Kevin tells her then let's go, but she says she's going to do it by herself; she can't have Kevin there while he's obsessing over a photo. Young Randall asks Jack to teach him how to box. Randall tells him about Dylan, a student at school who's picking on him. Jack says that they'll take care of it but Randall says that everyone will think he's a snitch. He promises Jack that he won't box unless he has to defend himself.

Randall is at church. In the middle of mass, Soloman Brown introduces him to the congregation and welcomes him to the neighborhood. Beth and the girls arrive at the grocery store to set up their cookie stand but find that another troop has already claimed that spot. Beth tells the girls they'll go someplace else. Randall gets a call from Kevin. Kevin wants to talk about the photo he found and wants to go visit Randall. Randall texts him a street address where they can meet. Kate is trying to get Audio to eat; Toby walks into the kitchen and asks what's wrong with the dog. Kate admits that she wasn't watching him at the park and that he might've swallowed something. Toby is upset about this and makes Kate feel bad. Kate tells him that she'll go call the vet.

Young Randall and Jack practice boxing. Rebecca arrives home early and catches them in the act. Randall arrives at a Chinese restaurant and meets up with Kevin. Kevin shows Randall the photo. Kevin wonders if his dad was in love with the woman in the photo, but Randall can't be sure. Randall asks why he choose now to become interested in all of this. Kevin says that it's because he's curious about Dad. Randall replies that he is too, but Jack made it clear that Vietnam was a chapter in his life that he didn't want them to know about. Kevin relents and a waiter brings them food, on the house. Randall asks if Kevin's free all day and takes him to his campaign office. Randall comes up with the idea to have Kevin help out with his campaign since he's popular in the Korean culture.

Rebecca and Kate talk on the phone while Kate is at the vet. Kate asks her mom what to do about Audio. Rebecca tells her to take him home because she'll feel more in control. Rebecca says that she's happy that Kate is asking her for advice but that she needs to learn to rely on her own judgement since she's starting a family. Jack and Rebecca have an argument about boxing. Rebecca tells him that he can't keep things about their son from her. She goes to call the principal. Annie and Tess have set up their cookie stand at the mall but no one is there. They finally get one buyer, but Beth tells him they can only accept cash and he only has a card. Tess gets upset because her mom forgot the credit card swiper, so the man leaves. Tess and Annie start to complain about how Beth isn't as good as one of their friend's mothers. Beth tells them to shut up and to pack up their things.

Rebecca gets off the phone with the principal. She learns that Randall's bully isn't real and that he made the kid up. Jack says that he'll go talk to Randall but before he does he explains to Rebecca why he boxes: to keep bad thoughts away. Toby gets a text from Kate but doesn't respond. Instead he gets up, goes to take a shower, and gets dressed. Deja talks to Beth and tells her that she needs to talk to Randall if she's sad. Beth apologizes to both Beth and Annie for exploding. Randall gets called out for using Kevin as a way to get Koreans to register to vote. Randall tells them that he doesn't know what the community wants or needs, but if they'll talk to him, he'll listen.

Toby is waiting for Kate and Audio when they get home. Kate notices that he got dressed, and he tells her that he's worried she is going to leave him. Toby decides to go back to bed. Audio suddenly gets up to go to the bathroom, and Kate asks Toby to go for a walk with them. He says no but Kate insists, so decides to go with them. Kevin and Randall return to Randall's campaign office, where Kevin explains that he can't let it go and wants to continue looking into Jack's past. Randall tells him that he hopes he'll find what he's looking for. Jack talks to Young Randall about him lying. Randall tells him that he wanted to learn how to box because he wanted to be more like Jack; that Kevin is tough and got DNA traits from Jack because he's his "son-son", but Randall didn't. He wants Jack to teach him how to box so that he can learn how to become a fighter. Jack tells him that Randall is his "son-son" and that he has something that no one else has: Randall has a brain that's so smart and that that's going to be his secret weapon.

Randall gets a visit from a young Korean man. He tells Randall that his grandmother has never voted once in her life, but registered to vote today because Randall made her believe that he cared about what she had to say, and Randall says that he does care. The young man tells Randall that he doesn't have a campaign manager and that he wants the gig. Randall asks what his name is and the man says his name in Korean, but that most non-Korean people just call him John. Jack tells Rebecca that he can't get his mind around Randall sometimes. Rebecca gives Jack a present: headgear for boxing. Jack tells her that his brother, Nick, and he used to box. Rebecca asks him to teach her how to box and they fool around with the gloves. Randall goes to visit Soloman Brown, and tells him that he made sure that Randall felt like he didn't fit in at church earlier. Randall tells him that he got a campaign manager and that he's going to win Koreatown.

Kate and Toby walk Audio, and Kate tells Toby that she's not going to leave him - that for better or worse, she's going to stay with him; that she's going to get him through this, and if he falls again she'll be there to pick him up. Kevin goes to see Zoe at her hotel room; he has a gift for her. It's a visa application for Vietnam. He wants to go there and learn more about his dad. Zoe says that she'll go with him and kisses him. Randall arrives home and notices that something is off with Beth. She tells him that she's been pretending that she's fine, but she's not fine. He asks why she didn't tell him and she says it's because she didn't want one of his pep talks. He comes up with the idea to offer her a job on his campaign. He swears that it isn't a pity job. Beth tells him that they're going to win an election and they kiss. 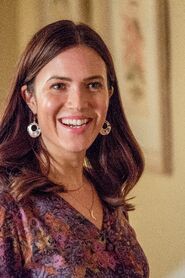 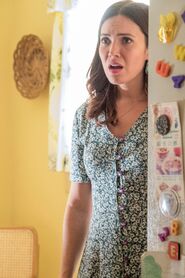 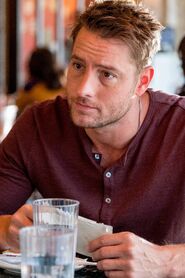