Don't Take My Sunshine Away

Don't Take My Sunshine Away

Don't Take My Sunshine Away is the sixteenth episode of the third season and the 52nd overall episode of This Is Us.

Beth and Randall adjust to their new normal. Kate and Toby spend time with baby Jack. Zoe and Kevin work on their relationship.

It's 1992, and the Big Three are to attend their first school dance. Randall would prefer to study instead, but chaperones Jack and Rebecca insist he honor his commitment to escort Kate's friend Jessica. In hopes of having his first kiss, Kevin ropes a reluctant Sophie into pulling a prank on the principal. Rebecca requests an old song to dance to with Jack, who never attended a school dance.

In the present, Toby struggles to bond with still-hospitalized baby Jack. Toby only sees Jack's suffering, but Kate sees herself and Toby in him, inspiring Toby to hold the baby.

Kevin and Zoe enter couples' therapy, to address not only the issue of his recent drinking binge, but the lies he told to cover it up. Unfortunately, something comes up that causes them even more disagreement: Kevin wants children, but Zoe does not. Kevin visits Sophie, who is engaged, and she tells him that his charm has spared him from difficult decisions. Kevin chooses a life with Zoe, even if it means never having children.

Randall and Beth are exhausted by their new schedules. Randall asks Beth to skip an important work opportunity to accompany him to dinner with the city council president. She reluctantly agrees, but ultimately doesn't show up to the event on time. Thinking Beth has stood him up, Randall leaves her an insulting voicemail message. Beth arrives and is gracious at dinner. Her phone battery has died and Randall, relieved, believes she hasn't received his message yet. After dinner is over, he tries to get her to delete the message, and she reveals that she's already heard it and tells Randall that he needs to go sleep on the cot at his office in Philadelphia. He walks out of the room, but comes back and confronts her and they close the bedroom door to have it out. 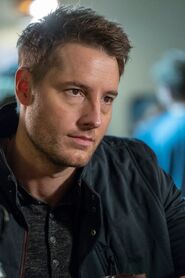