A Father's Advice is the first episode of the second season and the 19th overall episode of This Is Us.

The Season 2 premiere picks up during the Big Three's thirty-seventh birthdays as Randall and Beth debate on a life change, Kate pursues a new passion and Kevin balances his career and relationship. Meanwhile, Jack and Rebecca deal with the fallout of their fight. 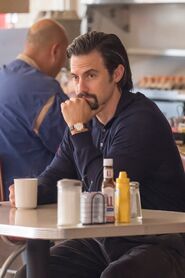